Sometimes also called sea daffodil, or Peruvian daffodil, the white spider lily is unique and quite elegant. This plant reveals a very beautiful blooming during the entire summer season. It requires heat to grow in full earth: that’s why growing it in warmer oceanic climates is common.It’s known that flowers have meanings, which vary in different cultures. You can express your emotions and thoughts through them. This means you should be cautious when you present someone with a bouquet. However, this doesn’t mean everyone knows the language of flowers.

Back in the Victorian Era, flowers were used as a means of communications. People used them as codes for what they wanted to say. But don’t think that they were the only ones. The Chinese and Japanese incorporated flowers in their art in culture long before the British. There’s even a Japanese equivalent of the language of flowers — hanakotoba. The fragile beauties are dominant in their art, clothes, even in legal documents and the national symbol. Even the art of Ikebana is an expression of sentiments and emotions through a combination between nature and art. Here are some flowers and their meanings:

There are many species of lilies and they represent different things. The white lily is a symbol of chastity and purity. Lycoris is a genus of about 20 species of perennials in the family Amaryllidaceae, native to Eastern Asia, mainly China and Japan.Most species have flowers with narrow, strap-like petals and long stamens that give them their spidery appearance. The flowers come in many colors and will bring cheer to everyone who sees it!

The genus was named after the Roman actress and mistress of Mark Antony, Lycoris.The plants are often called Spider Lilies because of their shape. Lycoris symbolizes death and reincarnation.The most popular species in the genus is Lycoris radiata, commonly known as “Red Spider Lily”, “Red Magic Lily” or “Hurricane Lily”.The flowers appear on their own, unfettered by foliage and it’s always lovely to see these flowers because no leaves are present when the blooms appear.

In Japan, Lycoris radiata is known as “Higanbana“, which roughly means “The flower that blooms during the (fall) equinox”. It blooms around the time of the autumn equinox in late September to early fall all across Japan.The flower is also referred to as “Manjushage”, which means “The flower in heaven”. It is believed that its bright colors and striking appearance lead souls into the afterlife. Higanbana is one of the most iconic autumn flowers in Japan and is often seen in temple precincts and cemeteries. Japan’s largest Higanbana field is located at Kinchakuda, in Hidaka City, Saitama. It is one of the largest parks in Japan with over 5 million of these flowers blooming like fireworks against the soft blue sky. Most of the Lycoris species do not bloom like other plants. Instead, they bloom on flower stalks with no leaves present, hence the common name Surprise Lilies or Naked Ladies. The flowers appear on leafless stems in late summer, while the leaves die back before the flowers emerge or appear afterwards. The flowers appear from nowhere, since there is no foliage to indicate where the bulb is planted, so don’t be surprised if they magically pop up in the middle of the yard!

The bulbs of Lycoris radiata are used in traditional Chinese medicine. The plant is used to treat a variety of illnesses, including ulcers, swellings, stomach and liver problems, rheumatism and epilepsy. It has also been shown to have anticancer properties. They are extensively cultivated as ornamental plants in Eastern Asia.

Pierre-Joseph Redouté (10 July 1759 – 19 June 1840), was a painter and botanist from Belgium, known for his watercolours of roses, lilies and other flowers at Malmaison, many of which were published as large, color stipple engravings. He was nicknamed "the Raphael of flowers" and has been called the greatest botanical illustrator of all time.

Redouté was an official court artist of Marie Antoinette, and continued painting through the French Revolution and Reign of Terror. He survived the turbulent political upheaval to gain international recognition for his precise renderings of plants, which remain as fresh in the early 21st century as when first painted. He combined great artistic skills with a pleasing, ingratiating personality which assisted him with his influential patrons. After Queen Marie-Antoinette, his patrons included both of Napoleon's wives -- Empress Joséphine and Marie Louise, Duchess of Parma—as well as Maria Amalia of Naples and Sicily wife of Louis Philippe I, the last king of France.

Redouté collaborated with the greatest botanists of his day and participated in nearly fifty publications depicting both the familiar flowers of the French court and plants from places as distant as Japan, America, South Africa, and Australia. He worked from live plants rather than herbarium specimens, which contributed to his fresh, subtle renderings. He was painting during a period in botanical illustration (1798 – 1837) that is noted for the publication of outstanding folio editions with coloured plates. Redouté produced over 2,100 published plates depicting over 1,800 different species, many never rendered before. Of the French botanical illustrators employed in the French capital, Redouté is the one which remains in the public consciousness today. He is seen as an important heir to the tradition of the Flemish and Dutch flower painters Brueghel, Ruysch, van Huysum and de Heem.

The fountain erected in honor of Pierre-Joseph Redouté in Saint-Hubert, Belgium.

Redouté was born 10 July 1759, in Saint-Hubert, in the Belgian Province of Luxembourg. Both his father and grandfather were painters, and his elder brother, Antoine Ferdinand, was an interior decorator and scenery designer. He would never gain much in the way of formal education, instead leaving home at the age of 13 to earn his living as an itinerant painter, doing interior decoration, portraits and religious commissions. Eventually, in 1782, he made his way to Paris to join his brother in painting scenery for theaters.

In Paris, Redouté met the botanists Charles Louis L'Héritier de Brutelle and René Desfontaines, who steered him towards botanical illustration, a rapidly growing discipline. L'Héritier became his instructor, teaching him to dissect flowers and portray their specific characteristics with precision. L'Heritier also introduced Redouté to members of the court at Versailles, following which Marie Antoinette became his patron. Redouté eventually received the title of Draughtsman and Painter to the Queen's Cabinet. 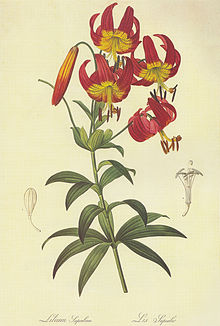 Cheveau, a Parisian dealer, brought the young artist to the attention of the botanical artist Gerard van Spaendonck at the Jardin du Roi, which would become the Jardin des Plantes of the National Museum of Natural History in 1793, after the Revolution. Van Spaendonck became another of Redouté's teachers, especially influencing his handling of watercolor.

In 1786, Redouté began to work at the National Museum of Natural History cataloguing the collections of flora and fauna and participating in botanical expeditions. In 1787, he left France to study plants at the Royal Botanic Gardens, Kew near London, returning the following year. In 1792 he was employed by the French Academy of Sciences. In 1798, Empress Joséphine de Beauharnais, the first wife of Napoleon Bonaparte, became his patron and, some years later, he became her official artist. In 1809, Redouté taught painting to Princess Adélaïde of Orléans.

Flowers by the artist (Rosa centifolia, anemone, and clematis)

After Empress Joséphine's death (1814), Redouté had some difficult years until he was appointed a master of draughtsmanship for the National Museum of Natural History in 1822. In 1824, he gave some drawing classes at the museum. Many of his pupils were aristocrats or royalty. He became a Chevalier of the Legion of Honour in 1825. Although particularly renowned for his botanical exploration of roses and lilies, he thereafter produced paintings purely for aesthetic value.

Redoute taught and painted up to the day he died of a stroke on 19 or 20 June 1840. He was survived by his wife, Marie-Marte Gobert, whom he married in 1786, and their two daughters. He was interred in Père Lachaise Cemetery. A Brussels school bears his name: the Institut Redouté-Peiffer in Anderlecht.

Most of the Les Liliacées watercolours went from the Empress Joséphine to her son from her first marriage Eugène de Beauharnais. Most of the watercolours of her Jardin de la Malmaison (gardens of Château de Malmaison) were acquired by the Fitzwilliam Museum in Cambridge.

Redouté's paintings for Les Roses were bought by Charles X of France for his widowed daughter-in-law, Marie-Caroline of Bourbon-Two Sicilies, Duchess of Berry. Their whereabouts are virtually untraceable: in 1948 some were sold by Sotheby's in London and a few were acquired by the Hunt Institute for Botanical Documentation; later, single sheets have appeared repeatedly in auction.

In 1985, 468 leaves were bought at a New York auction by an art dealer for approximately 5.5 million and then dispersed.

In the 20th and 21st century, numerous exhibitions in Europe, the Americas and Australia have been devoted to the work of Redouté. The Biodiversity Heritage Library, the Library of Congress and other libraries have made many of his works accessible online and reproductions of his prints are available from virtually all print and poster shops.

The standard author abbreviation Redouté is used to indicate this person as the author when citing a botanical name.