Chamber music is a form of classical music that is composed for a small group of instruments—traditionally a group that could fit in a palace chamber or a large room. Most broadly, it includes any art music that is performed by a small number of performers, with one performer to a part (in contrast to orchestral music, in which each string part is played by a number of performers). However, by convention, it usually does not include solo instrument performances.

Because of its intimate nature, chamber music has been described as "the music of friends". For more than 100 years, chamber music was played primarily by amateur musicians in their homes, and even today, when chamber music performance has migrated from the home to the concert hall, many musicians, amateur and professional, still play chamber music for their own pleasure. Playing chamber music requires special skills, both musical and social, that differ from the skills required for playing solo or symphonic works.

Johann Wolfgang von Goethe described chamber music (specifically, string quartet music) as "four rational people conversing".This conversational paradigm – which refers to the way one instrument introduces a melody or motif and then other instruments subsequently "respond" with a similar motif – has been a thread woven through the history of chamber music composition from the end of the 18th century to the present. The analogy to conversation recurs in descriptions and analyses of chamber music compositions.

During the Baroque period, chamber music as a genre was not clearly defined. Often, works could be played on any variety of instruments, in orchestral or chamber ensembles. The Art of Fugue by Johann Sebastian Bach, for example, can be played on a keyboard instrument (harpsichord or organ) or by a string quartet or a string orchestra. The instrumentation of trio sonatas was also often flexibly specified; some of Handel's sonatas are scored for "German flute, Hoboy [oboe] or Violin" Bass lines could be played by violone, cello, theorbo, or bassoon, and sometimes three or four instruments would join in the bass line in unison. Sometimes composers mixed movements for chamber ensembles with orchestral movements. Telemann's 'Tafelmusik' (1733), for example, has five sets of movements for various combinations of instruments, ending with a full orchestral section. 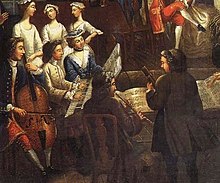 The harmonic role played by the keyboard or other chording instrument was subsidiary, and usually the keyboard part was not even written out; rather, the chordal structure of the piece was specified by numeric codes over the bass line, called figured bass.

In the second half of the 18th century, tastes began to change: many composers preferred a new, lighter Galant style, with "thinner texture, ... and clearly defined melody and bass" to the complexities of counterpoint. Now a new custom arose that gave birth to a new form of chamber music: the serenade. Patrons invited street musicians to play evening concerts below the balconies of their homes, their friends and their lovers. Patrons and musicians commissioned composers to write suitable suites of dances and tunes, for groups of two to five or six players. These works were called serenades (sera=night), nocturnes, divertimenti, or cassations (from gasse=street). The young Joseph Haydn was commissioned to write several of these.

Joseph Haydn is generally credited with creating the modern form of chamber music as we know it.[13] In 83 string quartets, 45 piano trios, and numerous string trios, duos and wind ensembles, Haydn established the conversational style of composition and the overall form that was to dominate the world of chamber music for the next two centuries.

An example of the conversational mode of composition is Haydn's string quartet Op. 20, No. 4 in D major. In the first movement, after a statement of the main theme by all the instruments, the first violin breaks into a triplet figure, supported by the second violin, viola and cello. The cello answers with its own triplet figure, then the viola, while the other instruments play a secondary theme against this movement. Unlike counterpoint, where each part plays essentially the same melodic role as the others, here each instrument contributes its own character, its own comment on the music as it develops. 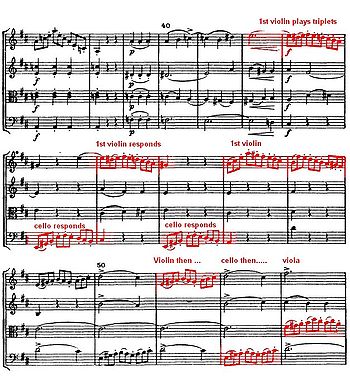 Haydn also settled on an overall form for his chamber music compositions, which would become the standard, with slight variations, to the present day. The characteristic Haydn string quartet has four movements:

His innovations earned Haydn the title "father of the string quartet",[14] and he was recognized by his contemporaries as the leading composer of his time. But he was by no means the only composer developing new modes of chamber music. Even before Haydn, many composers were already experimenting with new forms. Giovanni Battista Sammartini, Ignaz Holzbauer, and Franz Xaver Richter wrote precursors of the string quartet.

Mozart introduced the newly invented clarinet into the chamber music arsenal, with the Kegelstatt Trio for viola, clarinet and piano, K. 498, and the Quintet for Clarinet and String Quartet, K. 581. He also tried other innovative ensembles, including the quintet for violin, two violas, cello, and horn, K. 407, quartets for flute and strings, and various wind instrument combinations. He wrote six string quintets for two violins, two violas and cello, which explore the rich tenor tones of the violas, adding a new dimension to the string quartet conversation.Many other composers wrote chamber compositions during this period that were popular at the time and are still played today. Luigi Boccherini, Italian composer and cellist, wrote nearly a hundred string quartets, and more than one hundred quintets for two violins, viola and two cellos. In this innovative ensemble, later used by Schubert, Boccherini gives flashy, virtuosic solos to the principal cello, as a showcase for his own playing. Violinist Carl Ditters von Dittersdorf and cellist Johann Baptist Wanhal, who both played pickup quartets with Haydn on second violin and Mozart on viola, were popular chamber music composers of the period.

From home to hall 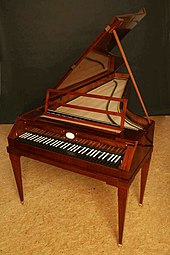 Copy of a pianoforte from 1805

The turn of the 19th century saw dramatic changes in society and in music technology which had far-reaching effects on the way chamber music was composed and played.

Throughout the 18th century, the composer was normally an employee of an aristocrat, and the chamber music he or she composed was for the pleasure of aristocratic players and listeners. Haydn, for example, was an employee of Nikolaus I, Prince Esterházy, a music lover and amateur baryton player, for whom Haydn wrote many of his string trios. Mozart wrote three string quartets for the King of Prussia, Frederick William II, a cellist. Many of Beethoven's quartets were first performed with patron Count Andrey Razumovsky on second violin. Boccherini composed for the king of Spain.

With the decline of the aristocracy and the rise of new social orders throughout Europe, composers increasingly had to make money by selling their compositions and performing concerts. They often gave subscription concerts, which involved renting a hall and collecting the receipts from the performance. Increasingly, they wrote chamber music not only for rich patrons, but for professional musicians playing for a paying audience.

Francesco Renaldi and his contemporary Johan Zoffany were both accomplished musicians and featured musician associates in their portraits. Francesco Renaldi was an English-born painter of Italian heritage about whose life little is known. He entered the Royal Academy Schools in London in 1776, aged twenty-one. For two years after 1781 Renaldi traveled in Italy, initially with Thomas Jones, the Welsh landscape painter and pupil of Richard Wilson.Evidently on at least one occasion Jones exploited Renaldi’s name to pass himself off as an Irish catholic in order to gain access to the prior of a monastery at Caserta near Naples—which would normally have been inaccessible to him on sectarian grounds—but Renaldi seems to have accepted this with good grace, even affability. Years later, in 1798, he exhibited at the Royal Academy a workmanlike but affectionate group portrait of the Jones family, which is now in the collection of the National Museum of Wales in Cardiff; it may contain the artist’s discreet but cheerful self-portrait.

Upon returning to London in 1783, Renaldi attempted without success to establish himself as a portrait painter at 2, Portugal Street, a modest house tucked behind Lincoln’s Inn Fields, on the Thames side. On November 3, Jones was pleasantly surprised to bump into Renaldi in Fleet Street, and the two dined together not long afterwards.In 1785, perhaps frustrated by commercial sluggishness, even sensing the prospect of professional failure in a highly competitive metropolitan market for portraits, Renaldi applied to the East India Company for permission to travel to Bengal. He supplied the names and addresses of two guarantors—Mr. Job Hart Price of Aldershot House, and Robert Codd of the 59th Regiment of Foot. These sureties were obviously acceptable to the company, because the following February Renaldi was given formal approval to go. He sailed aboard the Hillsborough, and reached Calcutta in August 1786.

For ten years Renaldi lived in Calcutta, Lucknow (working, it is believed, for Asaf ud-Daulah, the Nawab Wazir of Oudh), and in Dacca (now the capital city of Bangladesh). He was therefore one of only a relatively small number of European painters—among them William Hodges, Johan Zoffany, Tilly Kettle, and Ozias Humphry (all of whom are represented in the collection of the Yale Center for British Art)—who spent extended periods painting portraits of and for the nabobs (English, Scottish, and Anglo-Irish gentlemen of the East India Company whose tendency was to “go native”) and their more or less official Indian mistresses, or bibis. By 1796 Francesco Renaldi was back in England. To the following year’s summer exhibition at the Royal Academy he sent paintings of two Industany ladies, and one Mogul lady—all three were presumably bibis, possibly including this one—and also listed his address as 69, Margaret Street, Cavendish Square, very close to what is now Oxford Circus. In 1798 he may have exhibited a portrait of his own family, about whom we know nothing.
Thereafter he vanishes completely from view.