Hondarribia   is a town situated on the west shore of Bidasoa river's mouth, in Gipuzkoa, in Basque Country, Spain.

The border town is situated on a little promontory facing Hendaye (France) over the Txingudi bay. A service boat makes the trip between the two cities. The town holds an ancient old quarter with walls and a castle. In addition, Hondarribia features a beach across the Bidasoa from the touristy housing estate Sokoburu in Hendaye, alongside a mountain called Jaizkibel providing a hilly backdrop to the town. A road leads north-east from the beach area to the Cape Higuer, located in this municipality.

The town harbours the San Sebastian Airport, which serves domestic flights. The population as of 2005 is 15,700 inhabitants.

The battles fought for possession of this fortified stronghold are generally known by the Spanish name for the place (Fuenterrabía).

The women's basketball team Hondarribia-Irun and the rowing club Hondarribia Arraun Elkartea are the two most prestigious sports clubs in the town. In the last decade, the judo club Ama Guadalupekoa has had a lot of national medals in this discipline.

The Hondarribia-Irun plays in the Spanish women's basketball league since 2003, and it has competed against European teams several times. Hondarribia has a rowing team called Hondarribia Arraun Elkartea, and its boat is characterized by its green color and its name, “Ama Guadalupekoa”. In 2005 it won “La Bandera de la Concha”, one of the most prestigious competitions for Basque rowers.

Furthermore, the Vilariño family, which is fully linked to the world of the engine, continues to achieve success at national and European levels.

Hondarribia has its own golf course where Jose Maria Olazabal, one of the best golf players in the world, was raised, and marina, where the Olympic medalist Iker Martinez took his first boat roads 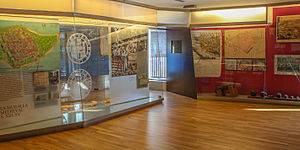 Center of interpretation of the walls of Hondarribia (Arma Plaza Fundazioa).