inscribed on the reverse " Croquet in Wales, The Garth & Builth Bridge over the Wye Sept 25th 1872" and further signed with mongram and dated  "1871"

pencil and watercolour
15 x 20.50 cm.
Enquire about this item

Builth Wells   is a market town and community in the county of Powys and historic county of Brecknockshire (Breconshire), mid Wales, lying at the confluence of rivers Wye and Irfon, in the Welsh (or upper) part of the Wye Valley. In 2011 it had a population of 2,568.

Builth is a longstanding anglicization of the Old Welsh Buellt/Buallt which combines bu being [bɨː], comparable to some Middle English orthography), meaning "ox" with gellt (later gwellt), meaning "lea or leas"; the same form is used regardless of gender of the animal.

The town added "Wells" in the 19th century when its springs were promoted as a visitor attraction. Its modern Welsh name Llanfair-ym-Muallt means "Saint Mary in Ox Leas".

For elections to Powys County Council the town's boundaries are coterminous with the Builth electoral ward, which sends one county councillor to sit on the council. Since 1995 the ward had been represented by Independent councillors. At the May 2017 elections the seat was won by former international rugby player, Jeremy Pugh, after forebear Avril York resigned in December 2016 to move to Hong Kong.

Twelve town councillors are elected every four years to serve on Builth Wells Town Council and represent the interests of the town's residents. 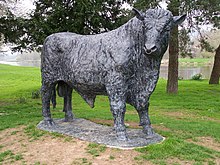 The White Bull of Builth may be a reference to a herd of White Park Cattle that lived in the area from Post-Roman times. Two herds survived in Wales to modern times. The laws of the time suggest that the medieval and later economy of the Welsh borders was strongly dependent on cattle. The Hereford cattle breed, named after Hereford market where it was most prominently sold was the main breed of the Welsh borders. Builth was the market for a variant of the Hereford called the Builth Smokey Face. This was the traditional animal of the area but the breed has not existed for many, many decades.

The Beulah Speckled Face is a local breed of sheep. Nearby Mynydd Epynt was famous for its horses until it was seized for military training purposes.

The beef cattle market has vanished and economically sheep are now vastly more important than cattle with consequences for the traditional woodlands of the area, the salmon runs and other important ecological features.

Many of the town's buildings, including the 1876 Market Hall, were built from stone from Llanelwedd Quarry. Much of the facing and other dressed stone used in the construction of the Elan Valley dams was also quarried here. The quarry produced the first occurrence of laumontite in Wales.  The quarry is operated by Hanson Aggregates.

The remains of Builth Wells railway station in 1967

The town is served by Builth Road railway station on the Heart of Wales Line, which is located just over 2 miles to the north-west. The more central (Builth Wells) railway station on the Mid-Wales Railway was opened in 1864, and closed with the line in 1962 -actually before the Beeching Axe. It was located across the river, next to the present showground.

A dedicated cycle route linking the town with Swansea (NCR 43) has been proposed and a 13-mile section of the route from Swansea has already been developed.

One of the main Wales north-south trunk roads, the A483, passes through the town, using the former railway route. As of June 2009 part of this road, along with the other main route through town (A470), is the subject of a transport study by the Welsh Assembly to help alleviate traffic congestion in the town centre.

The 18th-century bridge at Builth Wells carries heavy vehicles on the A470. It has six fine masonry spans, with relatively small round cutwaters, which are fitted on the upstream side with stout steel fenders to provide protection from debris. The centre of the bridge has a pedestrian refuge on each side. The arches have been reinforced by a layer of concrete in the soffit. The bridge was built in 1775 and widened in 1925. The river here marks the boundary between the old counties of Breconshire and Radnorshire.

Ysgol Calon Cymru is the main secondary school and is bilingual. It replaced Builth Wells High School in September 2018 and can draw on certain specialist teachers and facilities as is dual campus with its other site in Llandrindod Wells. In 2000 its predecessor was placed 67th in Wales (by percentage of its children, 59%, gaining 5 GCSEs at full pass grades A*–C). According to a 2010 report by Estyn its rate rose to 77%, making it 9th best performing (state secondary) in Wales and the only ranking in Powys after Llandiloes. A fall to two years of Special Measures was followed in 2017 by the closing report of the old school finding sufficient progress to remove it from those measures. Progress was ranked as strong as to six recommendations of 2015, in 2017, and sufficient progress as to the other.

The town features Wyeside Arts Centre, which has two cinemas and a live performance stage.

Builth Wells has a rugby union team called Builth Wells RFC, also known as 'The Bulls', who play on the Groe. The team play in the WRU SWALEC National League 2.

The town's local football team is Builth Wells F.C. who play in the Mid Wales League Division One, the third tier of Welsh football.

Builth Wells also has a cricket pitch, tennis courts, a sports centre with squash courts, a 25m swimming pool and a bowling green. 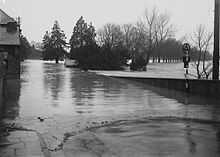 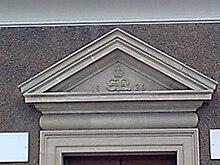 The cypher of King Edward VIII above the former Post Office

Builth Wells has a large number of Grade II listed buildings and fixtures.

A plaque on the wall of the post office stakes its claim as the only in England and Wales to bear a contemporary inscription to less-than-one-year monarch Edward VIII.The claim can be qualified to active post offices as the former one in Bradford-on-Avon has a similar insignia.

After a small health centre opened in the town, Builth Wells Hospital closed in 2013.